When we compare ourselves to others we deprive ourselves of the freedom in originality.

Envy fails to give God credit for what He has and what He will do in our lives.

No two paths are alike. And if they are, one is not authentic.

Who are we to tell God what He can and cannot, what He will or will not do?
2 comments: Links to this post

It's been a while. Sorry bout that. The show's going well, but leaving little time for blogging, since on my days off, I'm trying to make more money and spending it Christmas shopping. I'm paid to do the show, but, well, let's just say my paycheck leaves much to be desired, or much to be NEEDED...you know, for rent and nonessential things like that. But all is well! All is well. 'Tis the season for yuletide and carols, and the city is the best place to be in a season such as this. My Christmas season has truly begun. Yesterday we went to see the Rockettes with my parents, who are in town to see my show. And see my show, they did. Twice, in fact, because on Saturday night I got to go on as "Violet," which was nerve racking and fun all at the same time. So they came again on Sunday to see me in the ensemble. The Rockettes were really great. We saw the 75th anniversary Christmas Spectacular show, and it was quite enjoyable.

What is it about girls kicking in a straight line that's so cool, and who figured that out? It was a full day with the parents yesterday. Brunch at Good Enough To Eat, one of our favorite restaurants down the street, a quick cab ride to Radio City Music Hall for a chance at getting into the 2 o'clock show, success, lots of sparkle and lots of leg, a warming cup of hot chocolate, a last minute trip to the Museum of Modern Art, where artists attempt to prove how inanimate objects arranged in puzzling formations is art, a brisk walk to Rockefeller Center to see the tree, 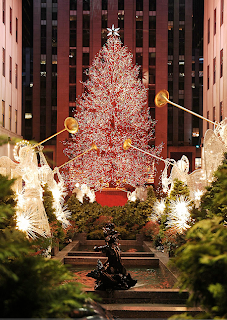 dinner at Virgil's Barbecue (Oh yum), dessert at Nonna's, then back home to play two games of Scrabble, the first of which I came in second to my father, and the second of which I whupped major heinie, especially that of my dear husband, which is saying something because he ALWAYS beats me in Scrabble. ALWAYS. But NO LONGER. I am the champion.

And my show was reviewed by the New York Times. The picture below is from the article. The reviewer liked the cast and the new theater, but didn't think the show measured up to the movie. I get that. But come on. Everyone knows that nothing can measure up to the movie. Get real. Listen to the story. It's told well, and it's a life-changing story. And in my opinion, the music is really good. Resembles Sondheim. Great lyrics. But it's a critic's job, so whatever. Here's the article. 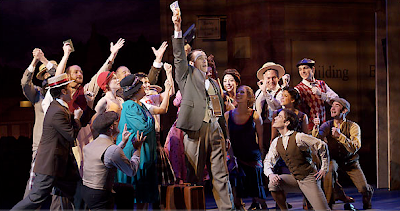 I'm the first girl from right to left. You can see my little head directly above the guy kneeling.
11 comments: Links to this post

My show opened this past weekend. I've had Monday through Wednesday off, a needed break after an intense rehearsal schedule with techs and dress. Back to it tomorrow. We've got a big week this week with double shows on Saturday and Sunday, so 6 shows in 4 days. I'm loving it!

I have a fantastic cast. Not only are they all extremely talented, they are sincere and kind people. I've become close friends with many of them and look forward to seeing everyone again on Thursday. Here's a couple of pics. 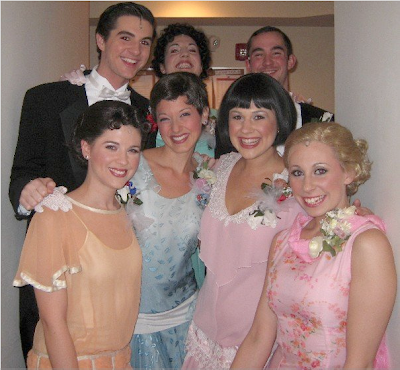 At the high school dance. I'm on the left. We have a really fun Charleston number in these costumes. 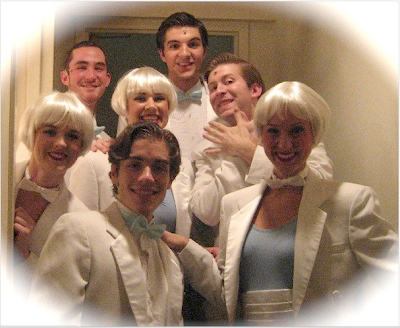 Here we are as angels. (Go ahead and laugh.) We surround Clarence the "angel second class" as he dreams of getting his wings. Again, I'm on the left. Nice Carol Channing wigs, huh?

So that's what I've been doing. I'll post more pics as I get them. I'm relying on everyone else because I no longer have a camera.
11 comments: Links to this post